This c.1916 O. Anderson portrait of two sisters, Christine and Mia Skoog, illustrates the changing aesthetic of Western fashion for women, along with the shifting ideals of fashionable silhouettes. In came 'ready-to-wear' fashion - much like our department stores today - but just slightly harder to obtain for those in rural outposts. Ready-to-wear fashion was so popular that homemade clothing and even tailored clothing was stereotyped as inferior among the upper classes of society.

While we can't know for sure if the garments Christine & Mia are wearing were part of the growing collections of 'ready-to-wear' lines that appeared in department stores and in catalogs after 1910, I'm taking liberties to say that it is probable. While their skirts lack the additional adornments seen in catalogs of similar styles, the textured and heavier fabrics with which they look to be made would prevent embellishments from being flattering. I'm also taking liberties in assuming that Swedish fashion history followed the same trends as American and other European fashions.

Both women in the image above wear a style popularized by magazines, fashion plates, and catalogs around 1916 - 1917: styles that advertised clothing suitable for 'stout' women. And although I wouldn't necessarily consider either of these women stout by any means, they were certainly outside the norm of the average 24 - 28 inch waist. Slim figures were still considered ideal in 1916, but larger figures were being acknowledged, as opposed to 1910 where derogatory descriptions of stout women's bodies included "comfortably housed woman of flesh," "woman of robust proportions," "short fat women," "full formed," or "portly" among others. And while in the the earlier 19th century, voluptuous, stout, or however you'd like to phrase it, women were considered matronly, and denoted successful motherhood. It also signified upper socio-economic status, especially after the Civil War when excessive weight equaled prosperity. 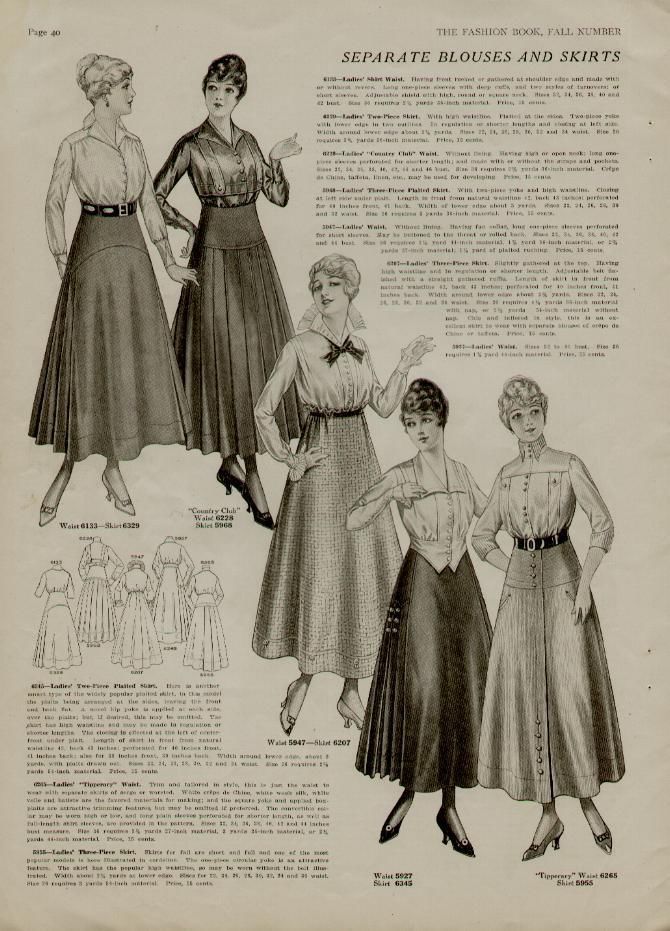 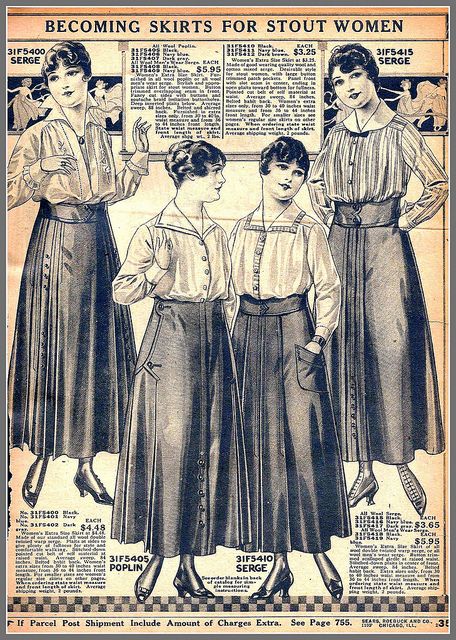 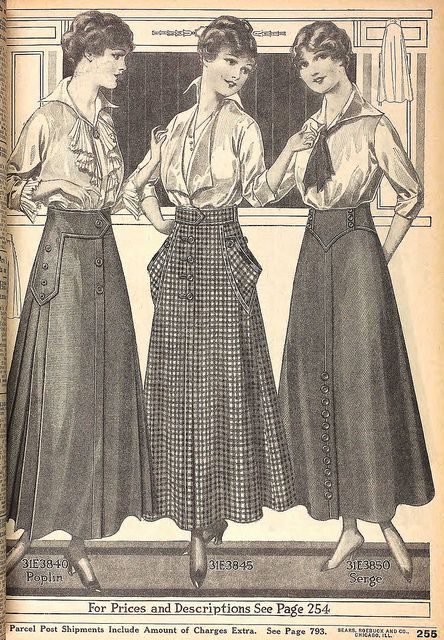 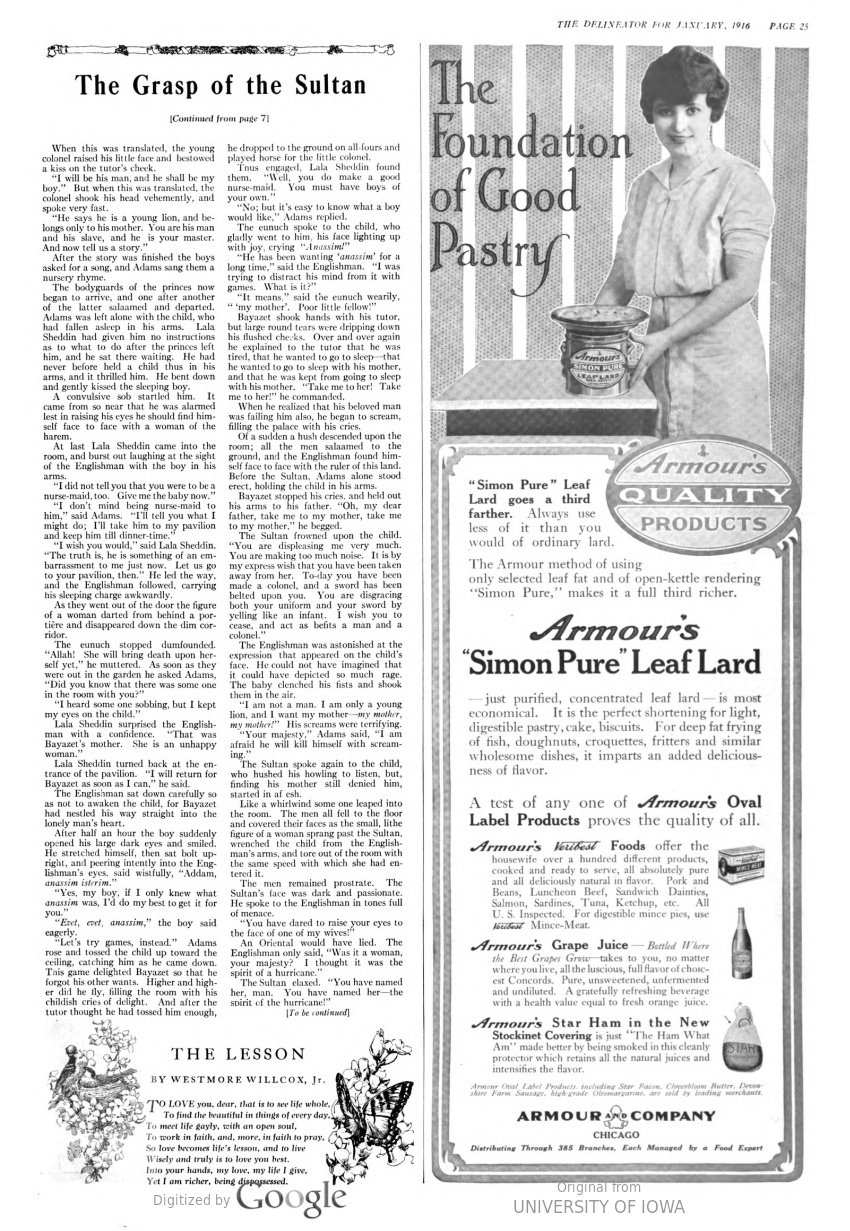 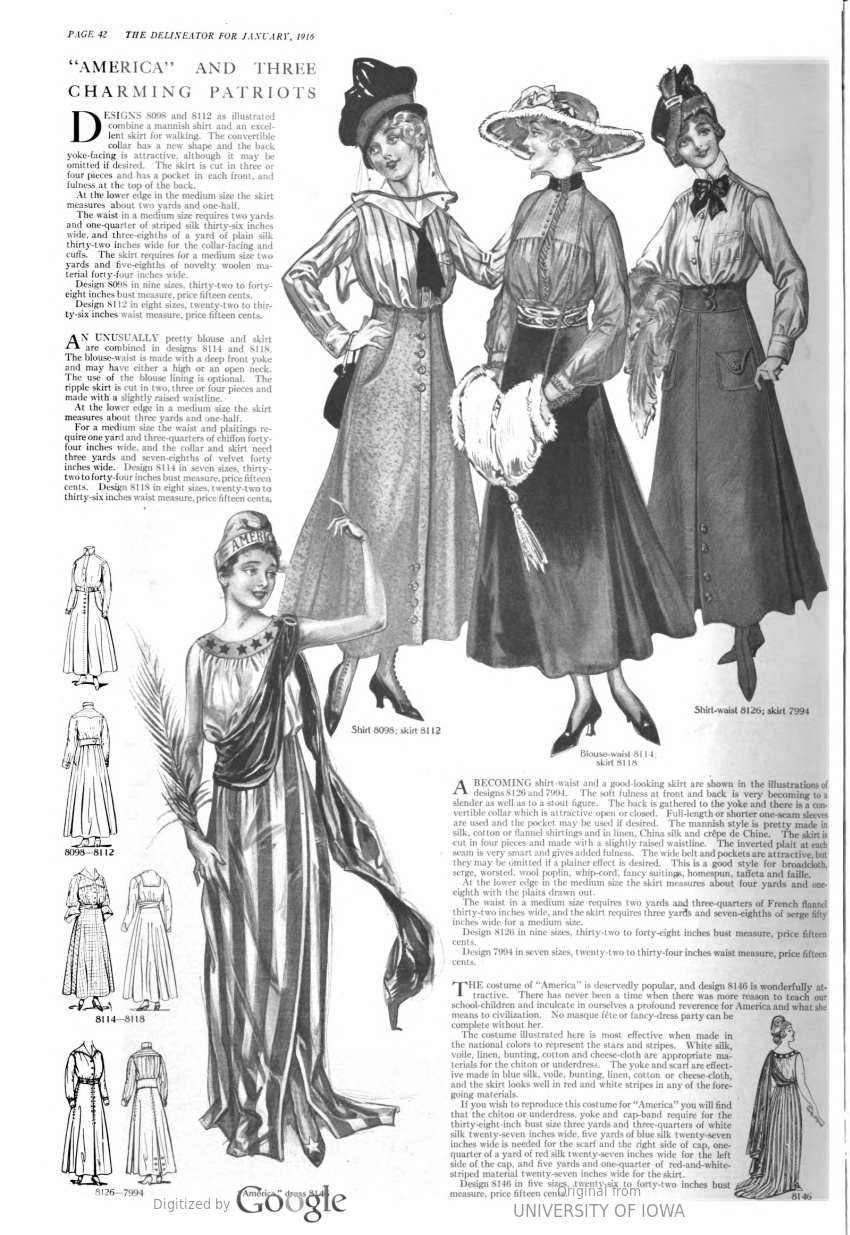 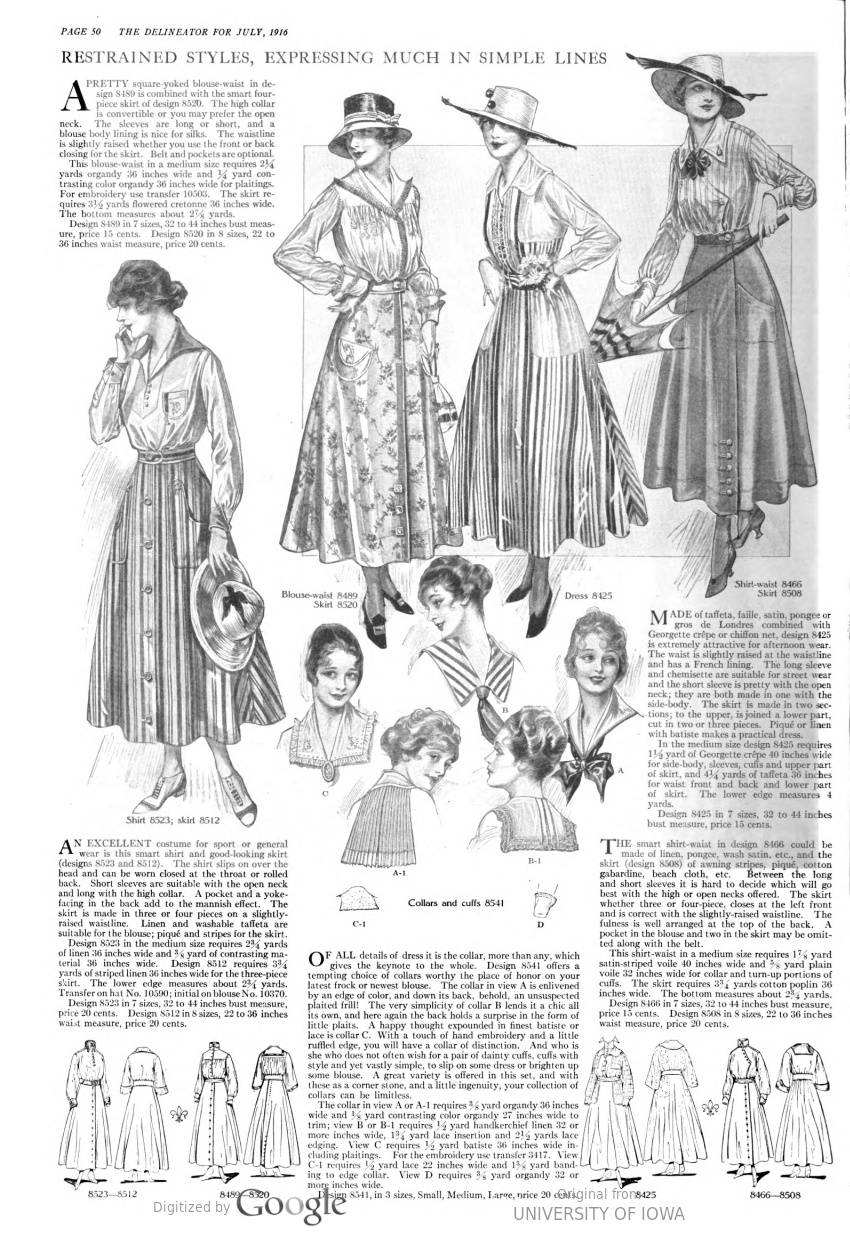 In her 2017 article "Stout Women Can Now Be Stylish": Stout Women's Fashions 1910-1919, Carmen Keist highlights that "by 1916, over 13 million women, or 12.7 percent of the total US population, were overweight or 'stout.'" Stores couldn't keep up with the demand for their clients with the economical, yet affordable ready-to-wear options. For example, in 1916, Lane Bryant - a ready-to-wear department store that specialized in hard-to-fit and plus-sized clothing (and is still around today!), exceeded the one million sales mark. Today, this isn't a hard feat, but in 1916, when suits and dresses were less than $20 (and sometimes even under $5), this is pretty significant. Demand was high, but there were few stores that could or would accommodate.

Even though stout figures were finally getting the recognition through specialty stores like Lane Bryant, magazines and newspapers alike continued to offer suggestions on how to reduce one's size through illusions. They understood the market for larger sized clothing, yet they shamed larger women by offering suggestions on how one could maintain the fashionable silhouettes despite their disadvantage. These included only wearing dark colors, avoiding loud patterns, continuing to wear a corset to avoid 'unsightly bulging,' as well as abandoning the popular tight fitting sheath-style dresses, as they exposed "every superfluous ounce of flesh."

A July 1917 Good Housekeeping article on "Solving the Problem of the Large Figure" commented on how vertical stripes created an optical illusion to make one's body look slender. Do you think Christine and Mia took Good Housekeeping, or a Swedish alternative, into consideration? I love that the younger of the two's shirtwaist has touches of stripes - just enough to be different from her sister, but still matching.

It is interesting to note that although excess weight meant socio-economic prosperity throughout the 1850s into the 1880s, the Progressive Era (1890-1920s) ushered in a new ideal highlighting slender, lithe silhouettes, emphasizing control over one's life. The role of mass media contributed to this change, idolizing slender women through advertisements, silent movies, beauty and fashion magazines, as well as through outlets such as Charles Dana Gibson's 'New Woman' in the 1890s. By 1910, slender body shapes were solidified in both American and European minds as desirable, with stout, matronly figures taking a backseat - a trend that continued throughout the 20th century and into the 21st.

There are a few other fun things to note about this photograph:

This portrait was taken at a studio in Arvika, a municipality of Värmland, Sweden. On the reverse, someone wrote 'Christine & Mia Skoog," but when doing a quick search through names of the Swedish Household Examination books for Värmland, no Skoog's appear. Much like the United States' census, I'm sure the Househould Examinations didn't include many names of those outside the patriarchy, making it even more difficult to locate these two without any further family history. I do know that someone in their family somewhere down the line emigrated to America, as I purchased this photograph stateside.

The photographer is O. Anderson - potentially Olof - but there's relatively little on him (and even his last name is misspelled in a number of cases as O. Andersson.) There is a large database of this photographer's work through the Swedish Genealogical Association's website Roots, but I couldn't really find anything else about him, other than that he might have had several branches over his career: Arvika, Trössnas, Charlottenberg, and Mosseberg. Because I'm not Swedish, nor have I been to Sweden, I'm guessing that the Trössnas, Charlottenberg, and Mosseberg are much like Arvika - municipalities within Värmland. Embossed on a number of his cabinet cards are the Swedish royal crest, although not on the image in my collection. Does this mean he was a royal photographer? Doubtful. More like he felt a sense of patriotism toward the crown, and felt it was a nice addition to the card.

Out of the 231 examples of portraits on the Swedish genealogical site showcasing Anderson's body of work, the art deco style monogram appears on 12 other photographs - and only one with a known date -1919. The other images each look to be taken between 1913 to 1919, but it seems Anderson had a fairly long career. In looking at the various fashions, I would judge his career in Arvika to span around 40 years, from the 1870s up 1919, with the bulk of his work happening between the late 1880s and 1890s. As none of the photographs within that website appear to be photographed after 1919, I'm assuming he either retired from photography or died.

Should you want to know more about stout clothing styles in the 1910s, check out the following resources:

"Design and Materials Especially Adapted to the Figure of the Older and Stouter Woman." Good Housekeeping, September 1916. https://babel.hathitrust.org/cgi/pt?id=umn.31951000597543n&view=1up&seq=16